I can still remember the day when I came home from school and my toddler brother had torn a few pages from my Italian dictionary.  I was a senior in college.  I don’t recall if I was upset, but I knew that he didn’t know any better, and quite frankly, it was a new experience having a baby in the house.  But for some reason,  when I think of my brother as a baby, that memory always comes to mind. Soon after, I graduated from college and  moved out of my dad’s house. After that, I didn’t really get to witness the day to day mischief and quirky things that he did at home. But I made an effort to see him when I could.

Although I am almost 20 years older than my brother, we’ve always had a bond. He is what I like to call an old soul.  There is a maturity about him that I have always appreciated.  I’ve never been the best baby sitter, but I always enjoyed having him around for sleepovers ever since he was a little kid. He’s always had a curiosity about life and always asking profound questions. I always got a kick out of that.  It never felt like I was taking care of a little boy – I think that is why we’ve always gotten along. As I look back at all of those years celebrating his action hero birthday’s at the local park district, I can’t believe that he is now in college. It doesn’t seem very long when he graduated from 8th grade and I promised him that I would take him on a trip for his high school graduation. It seemed so far away.  The hubby and I love to travel, and I hoped that since my brother was going to take a foreign language in high school, that perhaps we could take him on a trip abroad.  His high school graduation came in a blink of an eye.

Last year he reminded me of that promise and asked if we were indeed going to take a trip.  I was ecstatic.  “Yes, let’s do it, where do you want to go?” I was waiting to hear somewhere in Europe – perhaps Italy or Paris?? As I enthusiastically waited for his response, he said “Universal Studios!”.  For a short moment, I’m sure I gave a look of a deer caught in headlights. I smiled and gave him a nod of okay.

It’s funny because I have been so caught up in traveling to foreign countries, that I admit I was a bit disappointed. But I had to remind myself that this was not about me, it was about my brother and his accomplishment. I was going to keep my word and all I wanted was for him to be happy.

During the summer we had a conversation to discuss the trip and we decided we would go for a few days in December.  We left for our trip on Christmas Day.  Our adventure began the moment we got to the airport. We had good conversations and good laughs.  I was nervous that he would be bored with me, but since Juan (the hubby) is a big kid, I knew that he would maintain the fun element of the trip.

We arrived late in the afternoon and we checked-in to our hotel.  The first thing my brother said as we walked into our hotel was “wow, this hotel is nice and it’s so big!”.  I definitely agreed, but quite honestly this hotel was within a modest budget. I was so happy to hear that he was grateful. In my mind, I wanted to go all out for him, because he is well deserving – but I don’t have the means. I should have known, that he has always been so grateful.

After we got settled in for a few minutes, we wasted no time and made our way to Disney Springs.  We were all famished! When I travel and am hungry, it takes me forever to decide where I want to eat -no matter how hungry I am.  For some reason, I just have to find the perfect place.  Well, my brother was experiencing hunger pains and he made a quick decision to stop into a small pizza shop. I admit, this would not have been my first choice (but this was not about me).  The place was crowded! But he took it upon himself to score us a table while we ordered our food. We had some delicious pizza and it was a great dinner spot.  Huh! I learned something at that moment. (I will let you ponder that).

We wanted to maximize our 3 day pass and given that we went during peak season, we got up early! We got ready, had breakfast and made our way to the theme park.  The main attraction for my brother was to visit the Wizarding World of Harry Potter.  The hubby was totally geeking out for this too! I thought to myself, I will make the best of it. I went with an open mind.  I didn’t do much research on the theme parks and didn’t know what to expect, but as soon as we walked in and saw roller coasters, I told my brother that we were so getting on.  He was shocked! but pleasantly surprised.  I told him I meant  it when I said we would maximize the day. It had been a decade since my last roller coaster ride – I thought I’d never ride one again.  But we did and it was so much fun! Although we waited between 60-90minues for all of the attractions, the time flew. We chatted and laughed while we waited and I learned new things about my brother. I was in a very happy place.

The journey continued.  We ate fun snacks, and my brother and the hubby were in heaven with their butter beer. I enjoyed all kinds of sweets too, but this ice-cream was my favorite.  The hubby and I even ate crickets! As you can see, they enjoyed those Krusty burgers. 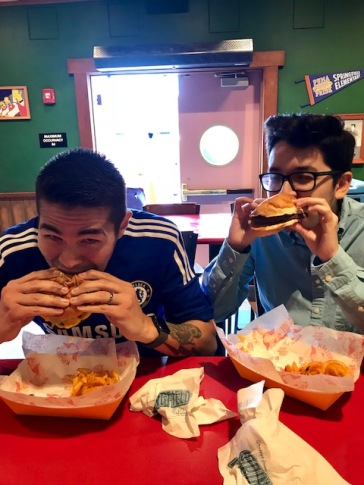 We walked from Islands of Adventure to Universal Studios numerous times.  We tried to be strategic in figuring out the shortest lines using the theme park app.  By the end of the night, we were exhausted, but my brother really wanted to get on Harry Potter and the Forbidden Journey.  We saw on the app that it was over 2 hours.  I did not have the patience and I told them that I would sit that one out.  My brother was generously kind and said it could wait – he clearly wanted all of us to experience it together.  I felt so bad that although he was so hyped, I convinced them that instead we would do it first thing in the morning on our last day.  As we strolled through the park, I noticed on the app that the wait time went down drastically. However, at that moment we were at the other theme park.  My brother came up with a game plan. He navigated our way to the other theme park- I was impressed. Although his feet were in pain, he hustled. It turned out that the evening show was about to start, and that area was super congested. That is the reason why the line was shorter – it was difficult to get into the vicinity. But that did not stop my brother and the hubby. We maneuvered those crowds seamlessly.  We even got scolded for crossing over where we shouldn’t have.  (They are extremely organized over there!) Anyhow, we managed to get to the ride and it was about a 70 minute wait. I admit, it was worth it. I am not a Harry Potter fanatic, but that attraction was wild. I had never experienced anything like that.

Overall, we had an amazing time.  We did a ton in a few days and had hilarious moments – too much to capture it all on this blog post. 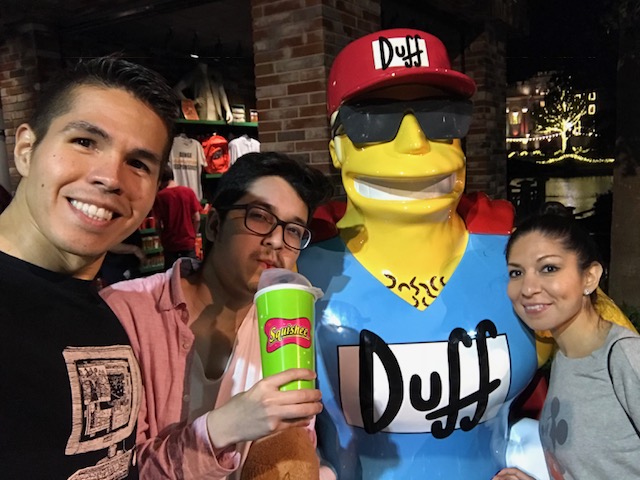 I have to say that I am grateful to my brother for allowing me to feel like a kid and express my inner child for a few days. Not only that, I got to meet a different side of my brother. For a long time, he was still that little boy that tore pages from my Italian book. But now, he has grown into a kind hearted, grateful, intelligent young man who knows how to enjoy the little things in life. In retrospect, I would not have changed one thing. This trip was perfect and I hope that he will join us on one of our travel adventures. 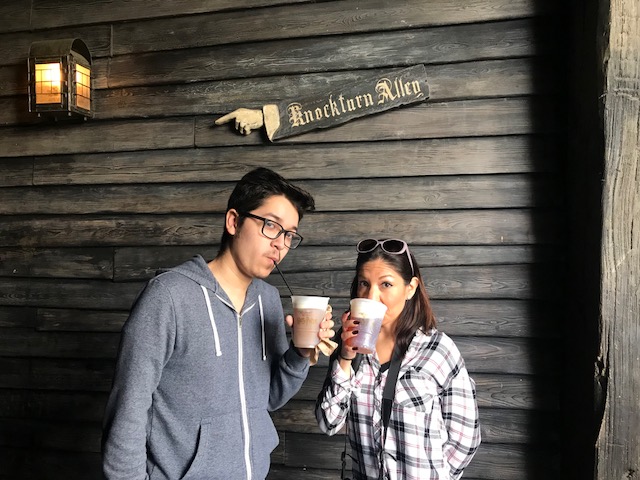 One thought on “Big Sister” 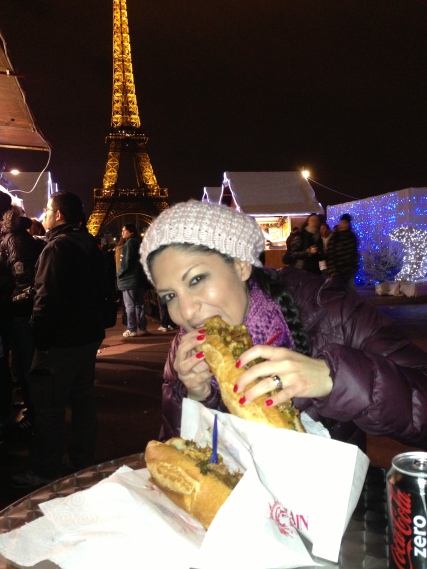 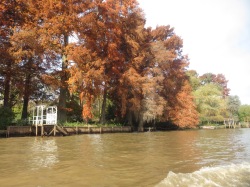 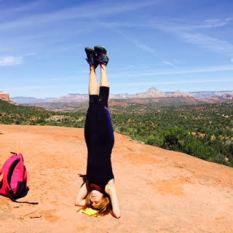 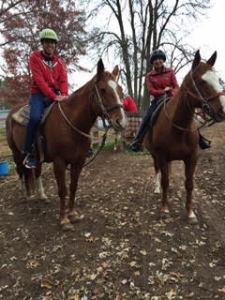 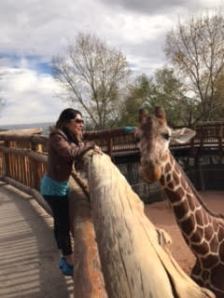 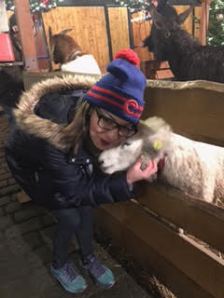 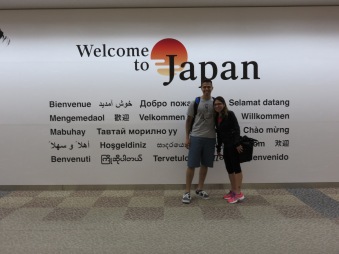 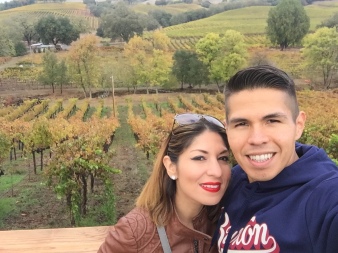